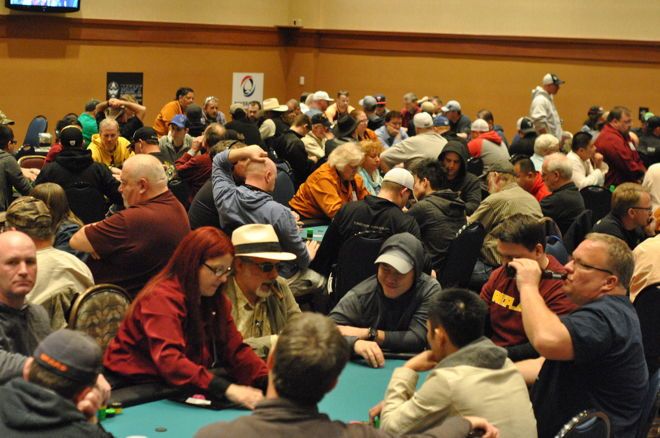 After I won my World Series of Poker Circuit ring, I was excited to see if I could stay hot. I headed out to Mid-States Poker Tour Meskwaki in Iowa for the $1,100 Main Event, and as it happened, I did make a deep run there to the final table.

Last week, we looked at a weird hand that helped propel me to the final table. This week we'll look at how I got that big stack in the first place.

Action folded to me on the button, where I looked down at

I quickly called and he could only smile and show

Any time you have a reasonably deep run in a tournament, you'll usually have a couple of times where you make near-nutted hands, and these spots are some of the most important to play well since you need to try to get max value out of your holding.

In this hand, I was obviously hoping that my button raise would get three-bet by the ultra-aggressive big blind. I actually think I should have raised bigger because Sun is rarely going to give up his blind without a fight and getting more money committed early would have been ideal.

As it happened, Sun defended and I flopped kings full. Against some opponents, checking the flop here is fine, although betting is probably still preferable in case you can catch the big blind holding a five.

When you're against an ultra-aggressive opponent, though, betting is a must, and the play is to bet small. If your opponent has something, you'll get plenty of money in the pot eventually. If he or she doesn't, you need to provide a little bait to see if your opponent will try to bluff you.

It didn't work on the flop as Sun just called, so I figured I'd try again on the brick turn. Nowadays, many players favor a small bet on the flop and a bigger bet on the turn, in some cases close to the size of the pot or bigger.

While that's a line I'd certainly use sometimes on this board for value with a five, with a king or pocket aces, or as a bluff with some other holdings, in this case a smaller bet is better. All of the aforementioned reasons apply, plus there is so much money back that the best way to get stacks in is to induce a raise at some point.

Luckily for me, that's exactly what happened as Sun made it 80,000 to go. I had 200,000 back and no reason to do anything besides call. At this point, I obviously was hoping I'd caught him in a cooler with trip fives.

When Sun opted to go forward with his bluff on the river rather than hoping to win showdown with his turned pair, everything worked out ideally and I was able to get a commanding chip lead on the bubble, which powered me to a final table run.

I think one interesting aspect of this hand is thinking about what it means for some of the times you're in these spots with a hand that's not nutted. Say, you're holding something like

in this spot. Many times, you'll check the turn on a board like this as the standard play.

However, it could be more profitable against some rare opponents who have a high level of aggression to try to induce bluffs, especially when you have a king to make it a little less likely your opponent has one. Of course, you have to prepared to make some big river calls, as Sun showed when he had the heart to rip it in. Keep that in mind if you're laying some bait by betting small to induce.