Turning the Nuts and Facing a Bet: Call or Raise? 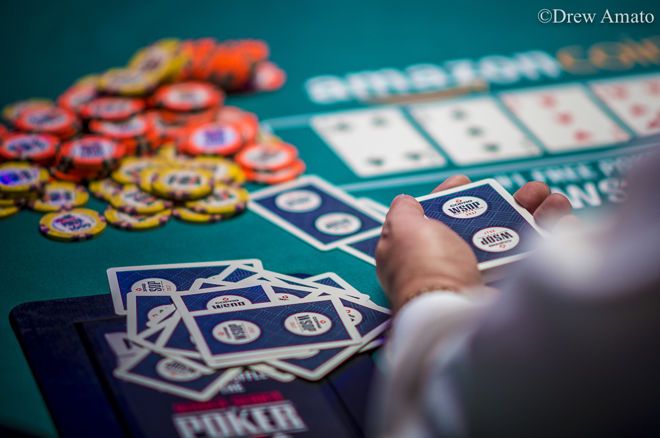 Today I have a fun hand to review, another from that $5,000 no-limit hold'em World Series of Poker event from which I've been selecting some interesting hands to analyze. In this one I'm dealt a premium hand and turn the nuts with it, meaning the key issue here involves finding the best way to extract the most value.

I actually just called the raise. As I explain in the video below, I almost always reraise here, but for a couple of reasons only called in this instance.

It folded around to Daniel Negreanu in the big blind who called as well. I had both opponents covered, having about 100 big blinds to start the hand while the UTG player had around 45 BBs and Negreanu about 25 BBs.

With a little more than 10,000 in the middle, the three of us saw the flop come

. Both Negreanu and the UTG player checked, and though I might have bet with my two overcards and Broadway draw, I checked as well.

The turn then brought the

to give me Broadway. Negreanu checked, and this time the UTG player bet 4,200. Here is a key decision point in the hand — should I just call and go for value on the river, or should I raise right here?

Listen to how I debate the pros and cons of each option, then see what happened after I made my choice.

What do you think about how I played this hand? Did I butcher the situation by choosing to go for value on the river instead of on the turn? Let me know in a comment below.

Jonathan Little is a professional poker player and author with over $6,800,000 in live tournament earnings. He writes a weekly educational blog and hosts a podcast at JonathanLittlePoker.com. Sign up to learn poker from Jonathan for free at PokerCoaching.com. You can follow him on Twitter @JonathanLittle..

Tommy Angelo Presents: Checking Behind on the Flop with a Straight Draw