How to Play Seven Card No Peek 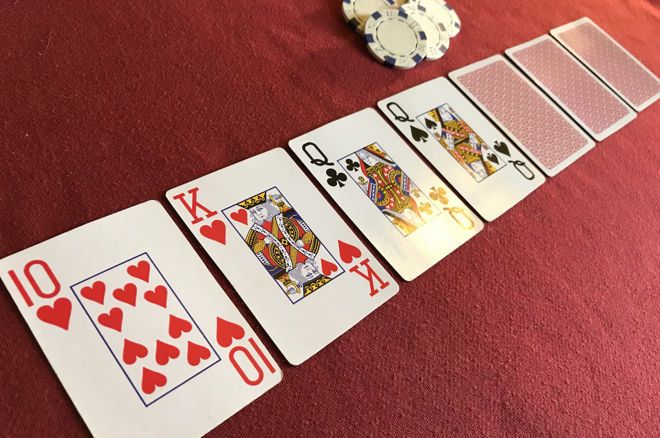 Here's another fun poker variant you might want to introduce into your home game, a seven-card stud variant that has a long history, actually, as a favourite non-standard game — 7 card no peek.

Every poker variant contains an element of suspense. In fact, that's one of the reasons why poker is such a fun game to play.

The progression from the first dealing of cards through the betting rounds to the showdown is always fun to follow, with tension often building as the hand proceeds from one step to the next.

Seven-card no peek is a game that really heightens suspense, making it a much-loved home game choice.

Such is the case with all no peek poker games, actually, which involve the gradual revealing of players' hands, one stage at a time.

There's also another added twist that makes things even more suspenseful when it comes to 7 card no peek.

Not only are players only able to see their opponents' hands all at once but in increments, but they can only see their own hands in stages, too!

The game goes by several different names. Some know it as Seven Card Stud Rollover or Beat Your Neighbor, while others know the same game as No Peeky or No Looky.

Whatever it is called, it's a very entertaining seven card poker game that can allow players of varying levels of ability all to compete on a somewhat level playing field, although there is some skill involved in the game.

Let's explain 7 card no peek rules to show how this works.

The easiest way to explain no peek card game rules is to walk through an example hand.

How to Play 7 Card No Peek

The action begins with the dealer dealing seven cards face down to each player.

As already mentioned, players are not allowed to look at their cards yet. All the cards must remain face down.

The player sitting to the left of the dealer gets things started by turning up his or her first card.

At that point comes an initial betting round, starting with that same player.

Players can check or bet, and once a bet is made they can fold, call, or raise and so on until the last bet is called.

Once the first betting round is over, the next player (moving clockwise) turns up his or her first card.

Let's get into that example hand to make all of this a little more clear.

It's a six-handed game, and after the cards have all been dealt Andy is sitting to the left of the dealer and is first to act.

Andy is showing the

and bets, and all five opponents — not knowing any of their cards yet, remember — call the bet.

Barbara is up next. She turns over her first card and it is a jack.

That doesn't beat a king, so she has to keep turning over cards until her hand's value exceeds king-high.

She has to turn over five cards to get there, finally showing

for a pair of nines.

Still trying to figure out the game?

Unibet blocks poker database software and HUDs, so the games are always...easier!

Now Barbara leads the betting. She could just fold, and perhaps should, as she doesn't have a great hand going.

But as usually happens in this game (especially when played for low stakes in a fun home game), she wants to stick around and so bets.

And (as typically happens) everyone calls her, so there are still six players in the hand.

Carter sits to Barbara's left, and it is now his turn to start exposing cards.

Again, he has to keep turning up cards until he can beat the highest hand showing (a pair of nines).

Unfortunately, he gets through all his seven cards —

— and only has a pair of sixes.

That means Carter's hand is "dead" and he's out, forced to fold.

However there is still another round of betting, and Barbara gets to start it with her pair of nines. She decides to bet again, and the four others still in the hand call.

(NOTE: Some omit the betting round when a player fails to turn up a hand that can be bet as Carter does here, and instead just move on to the next player.)

Action moves to Diane, who suffers the same fate as Carter after turning over

for a pair of eights.

Exit Diane, and again Barbara leads another round of betting, with her three remaining opponents calling.

It's Eric's turn now, and things go similarly for him as he flips up his seven cards —

Ace-high can't beat a pair, and so Eric is out. Barbara bets again. Fran is the only player who hasn't shown any cards, and she calls. And with his king up, Andy sticks around as well.

Fran finally gets her turn. She turns over her first four cards —

— and stops there as a pair of queens is now best.

A new round of betting follows, started by Fran who bets.

showing and six cards still face down, isn't too enthusiastic about his hand, in large part because he sees one king in Fran's hand and remembers Eric folded another.

But he still calls, as does Barbara with her nines, although she, too, isn't too optimistic as she recalls Eric also folded a nine.

Action returns to Andy, and he starts turning over his cards. He stops after turning up his fifth card. Here's what is showing now:

Andy's pair of kings puts him ahead of Fran, and with so few cards left he's feeling pretty good about the situation.

He bets, and Barbara and Fran both call.

Barbara is next, and she immediately turns up the

, giving her two pair. She bets, the other two call.

Fran's turn, and she turns up the

. Two pair for her, queens and eights!

She's in the lead now and bets, and both Andy and Barbara call.

Andy turns up his sixth card — the

! Now everyone has two pair, and Andy has the best two pair with aces and kings.

He bets, Barbara reluctantly calls again, and Fran calls, too.

Barbara turns over her last card — the

— which leaves her with her nines and fives. She's out.

Andy bets again, and Fran calls. Fran has one more card to turn over, and does so — the

Andy wins with aces and kings, and in fact doesn't even need to show his last card. (If Fran had grabbed the lead with her last card — say with a queen — Andy would've turned over his last card to see if he could grab the lead back.)

The players can decide what limits to play and when in a hand the bets change from "small" to "big" (e.g., on the third or fourth betting round, or whatever everyone likes).

This no peek card game is like others in the way it does involve a higher than average amount of luck. It also doesn't really provide opportunities for bluffing in the traditional sense, mainly because players can't "represent" hands they don't have since they themselves aren't allowed to see their unexposed cards.

But players can play draws fast or slow, and there's also skill involved in reading others' hands and also (most importantly) remembering what cards have been dealt.

As you have probably gathered, seven card no peek is a fun, often light-hearted "action" game that provides a nice change of pace from no-limit hold'em or other standard poker games.

Winning at poker is always a combination of multiple factors, and the 7 card no peek game is not an exception to the rule.

To beat your friends you'll need good cards as much as you'll need a good knowledge of the game. These are the articles you need to read:

The poker hand rankings chart: The first step to becoming great at seven card no peek is to know what beats what in poker. Our hand ranking chard is available also in PDF. Print it and bring it to the table.

How to play seven-card Stud: Since seven card no peek poker is a variant of seven card stud, you better learn how to play that one too.

Best free poker sites online: This list of websites lets you find all the top free poker games online you can try.

Five GREAT ways to induce action in your home game: Another excellent write-up by Ashley Adam to learn how to rock your next home game and impress your poker friends.