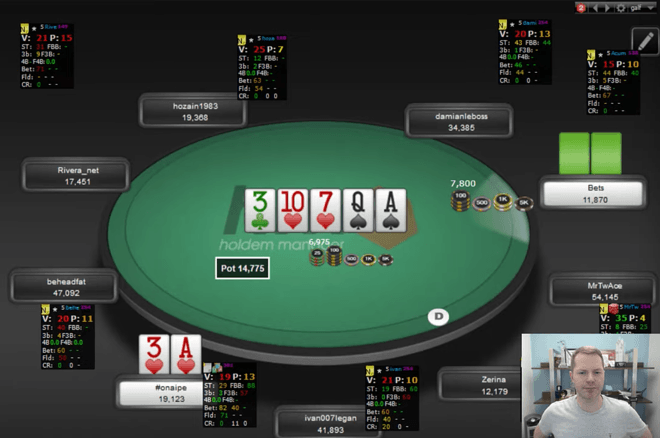 Poker pro and coach Jonathan Little has been producing a wide variety of strategy content for poker players for some time, including authoring multiple books and sharing videos and articles on his website and elsewhere, much of which is free to players of all levels seeking to improve their games.

Little started his popular "Weekly Poker Hand" series on YouTube more than five years ago, using the format to focus on particular concepts and common mistakes as illustrated in his hand analyses. In the episode shown below, Little returns to review one more hand played by a student in the Sunday Million on PokerStars.

With about 21,500 or 35 big blinds in his stack, Little's student watches a tight player with a similarly-sized stack in the hijack raise 2x to 1,200 and it folds to him in the big blind where he's been dealt

. Citing pot odds and potential equity, Little believes this to be an easy call and indeed Hero does call.

to give Hero bottom pair and the nut-flush draw, and both players check. Little is fine with that decision, though he also goes through different options in this spot after both a check and a bet from the opponent.

The turn brings the

, and Little notes how after the opponent checked flop that certainly suggests overcards, and thus it isn't too surprising to see him lead out with a bet of 1,800 (just over half-pot). Little rules out Hero semi-bluffing raise here as an option, and he agrees with Hero's decision to call.

that gives Hero two pair then makes things interesting, especially after his opponent makes an overbet of 7,800 (more than the size of the pot).

"This is one of the best hands we have, so we probably don't want to be folding it," says Little. He then talks about both players' ranges (and how both should be perceiving each other's range).

Could the opponent — typically a tight player — be trying to value bet here with worse than Hero's two pair?

Watch below and listen to Little's analysis, during which he touches on the following topics:

Slotomania Hacks and Cheats for Unlimited Free Coins in 2020

Barrel Twice, Then River Top Pair: Go for Value or Check Behind?