PokerNews to Cover the 2013 Aussie Millions 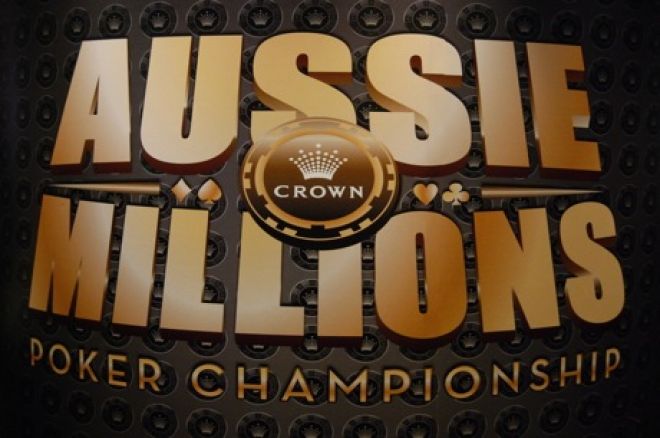 For the seventh consecutive year, PokerNews will be providing exclusive, live updates from the Aussie Millions Poker Championship. The 2013 coverage will focus on the four marquee events: the A$10,000 Main Event, A$100,000 Challenge, A$250,000 Challenge and A$25,000 Challenge.

Beginning on Jan. 17, the 16th-annual Australian Poker Championship — better known as the Aussie Millions — will begin at the Crown Casino in Melbourne, Australia. A total of 26 tournaments ranging from a A$600 to A$250,000 buy-in will be played, and a multitude of game types will be offered, including Pot-Limit Omaha, Pot-Limit Omaha Hi/Lo, Omaha Hi/Lo, Chinese Poker, Terminator No-Limit Hold’em, H.O.R.S.E., Mix Max and 8-Game.

Although they’ve become a bit of a trend lately, the Aussie Millions were the first to introduce the six-figure tournament to the circuit schedule. The inaugural A$100,000 event was held in 2006, and the winner was John Juanda. Here’s a list of all of the winners:

Beginning in 2011, the Aussie Millions also offered a A$250,000 Challenge. The tournament has only run twice, but both events created an unbelievable amount of buzz in the poker world.

While these two high-roller events generate a lot of excitement, the crown jewel of the Aussie Millions is the Main Event. Prior to 2003, the event was less than A$10,000, and in 1999, the event was Pot-Limit Hold’em. Since 2003, the Aussie Millions Main Event has generated a 10-year total prize pool of A$52,580,000. The winners in the five-figure buy-in era look like this:

To relive all of the events over the past several years, check out the PokerNews Aussie Millions Live Reporting archives.

If you live outside of Australia and want to buy-in to an event at the 2013 Aussie Millions before you take off, or you simply want to save a trip to the cage, you can register for the events online. If you’re interested in playing in a satellite for any of the events, you can check out the satellite schedule here. If you’re looking to plan your trip to the beautiful Crown Casino, we suggest that you explore the Crown Experience and weigh your booking options.