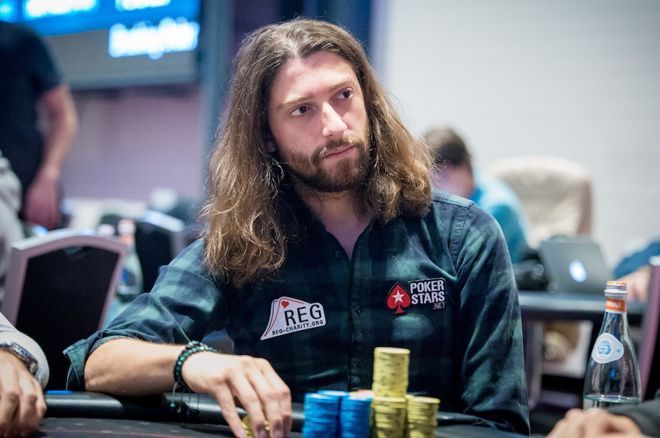 Among the bracelet events in the recently completed World Series of Poker Europe series in Rozvadov was the €100,000 buy-in Super High Roller won by the Czech Republic's own Martin Kabrhel for more than €2.6 million.

The tournament brought out all the big names, including Igor Kurganov and Fedor Holz, both of whom fell shy of the cash in the event. Prior to busting the pair got involved in an interesting hand on Day 1 in which Holz managed to pick off a big river bluff Kurganov — a hand which the Team PokerStars Pro discussed with PokerNews afterwards.

and both Holz in the hijack seat and the big blind called.

and the big blind checked. Recognizing that Holz didn't have too many

hands in his range, Kurganov continued with a bet of two-thirds the pot. Holz called and the big blind folded.

. As Kurganov explains, that card helped him narrow Holz's probable range of

hands down even further to just

, adding also that Holz might have three-bet preflop occasionally with some of those hands, too.

in his hand meant Holz also couldn't have either

. His hand lessened the likelihood of Holz having pocket jacks or nines as well, and knowing Holz would've probably three-bet higher pocket pairs, that meant if Holz had a pair it would have to be eights or lower.

Kurganov barreled once more, again betting about two-thirds pot, and Holz stuck around with a call, bringing the pot up to 1 million.

The river was a brick — the

. Both players had about 2 million back, and Kurganov bet again, this time making a pot-sized bet of 1 million. After tanking for a minute Holz came up with a call with

and won the pot.

Take a look and listen to Kurganov discuss his thinking throughout the hand as well as his bet sizing on the river, plus what hands he thought Holz might be putting him on as he tripled-barreled:

A Quick and Easy Way to Collect 350 Free Spins