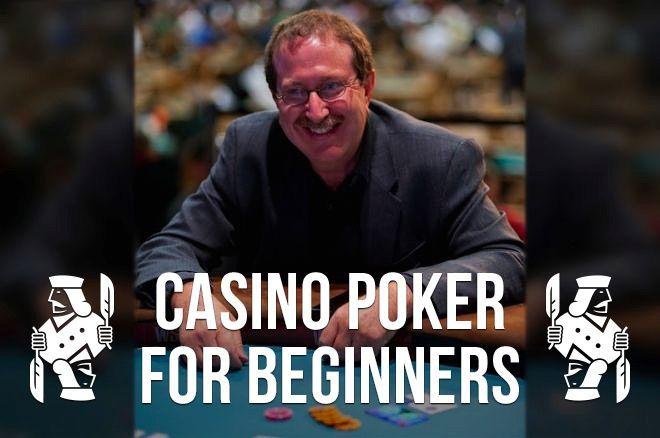 Ed. note: For those who might have missed it before, we're reprising Robert Woolley's series of articles for poker players who are new to live poker.

The series is great for newcomers, and likely useful as well to those with experience playing in casinos and poker rooms.

In movies and television shows set in the Old West, and in much literature from the late 19th century, if there is a poker game, chances are it will show players pulling out money in the middle of a hand and adding it to their bet.

In response, the opponent will pull out even more money, and throw that in.

When one of them runs out of cash, he will start borrowing from friends and onlookers, or even leave the game to hit up the local bank for a big loan — like Adriano Celentano with his legendary bluff in the 1981 poker movie Ace.

In some cases, it gets to the point that the players are tossing into the pot their wives' jewelry and the deed to the farm.

READ ALSO: Eight Reasons Why You Should Add Six-Card Omaha to Your Next Home Game

Pictured above was a humorous moment near the end of the $2,500 Omaha/Stud Hi-Low event at the 2012 World Series of Poker that recalled such scenes.

During what would ultimately be his bustout hand, Chad jokingly produced his Visa credit card and a AAA membership card after having pushed forward his last chips.

It might have worked in the movies, but not at the WSOP. Chad did earn some extra laughs, however.

Before I started playing poker myself, I would see or read such scenes in movies and wonder why anybody would play poker if it boiled down to the richest person winning by simply making a bet so big that nobody else could match it.

Couldn't Bill Gates bet $10 billion on every hand, and win every pot when nobody else could match it? Perhaps you've wondered the same thing. It's kind of an obvious problem.

The good news is that poker games don't work that way anymore. In the old days, they were playing under a system called "open stakes," but that has been replaced everywhere by the better system called "table stakes."

Here's how James McManus addresses the topic in his great history of poker, Cowboys Full:

Many real games of this period were played with open stakes, but too many scams, kited checks, deeds to twice-mortgaged farms, and other dubious IOUs eventually led to the near-universal adoption of table stakes.

Each player starts every hand with a verifiable stake on the table, and at no point during the hand may she remove money or chips from her stack or add any more from her purse, let alone from a banker across the street.

But once she goes all in, she retains full equity in the main pot as whatever side pots among better-funded players keep building.

The most obvious reason not to play for open stakes is that it would be impossible for the wealthiest person at the table — or the one with the healthiest line of credit — to lose.

So let's discuss precisely what this modern system of "table stakes" means to you as a player in a 21st-century casino poker game.

First, it means that that you put some amount of money, in chips and/or cash, on the table at the beginning of a session, and you can't take it off the table until you're done playing (except for minor things like tipping cocktail waitresses).

This is to prevent people from squirreling away winnings and only keeping minimal amounts at risk.

The idea is that after you've won, the winnings have to remain available for opponents to win back, until you declare yourself done for the day.

Suppose you start with $300 on the table, and you quickly run your pocket aces against some other poor schlub's pocket kings, and rightly win.

Now you have $600. Well, you've only been playing for five minutes, so you certainly won't want to pack up and go home.

On the other hand, you'd really like to lock up that $300 profit right now, and keep only the original $300 at risk. That way, the worst case scenario is that you will leave with the same amount of money in your pocket as you arrived with.

In fact, you will sometimes see new players try to do this, not knowing better. But it's strictly against the rules in every casino.

READ ALSO: Visiting a New Poker Room? You Better Ask These 7 Questions Before You Play

Some old-timers try it, too, even knowing it's against the rules. They're harder to catch, because they're being sneaky about it, whereas those who just don't understand the rules aren't trying to hide their actions.

This practice is known as "going south," or "squirrelling" or "ratholing" your money, and it is considered highly unethical.

This leaves you with three main choices:

For example, if you had been playing $1/$2 no-limit Texas hold'em, you can cash out of that game and enter a $2/$5 no-limit hold'em game, or find a stud or Omaha poker table.

Poker rooms treat that in the same way as if you had left and come back to that different game on a separate day.

However, you may have some other options. In most poker rooms, you can cash out and go do something else for some period of time, most commonly one hour.

After that much time has elapsed, you can start over again, as if it were a new day, and buy in for any legal amount, such as your original $300.

If you're in a place like Las Vegas or Reno, with casinos next door to each other, you can cash out from one place, walk to the next one, and start afresh.

Finally, some poker rooms allow you to pocket your winnings and start anew if you move to another table, even if it's the same kind of game and the same stakes.

In fact, some poker rooms require you to do so, because they don't want players moving to a new table with more poker chips than the maximum that a new player could buy in for.

You'll just have to ask what the rule is where you're playing.

What You See, Is What You Get

The second main thing implied by the term "table stakes" is that you can add more chips and/or cash to your stack, up to whatever is the maximum allowed for that particular game.

However, you can only do so between hands, not in the middle of a hand.

Whatever you have in front of you when the cards are dealt is what you have at stake for that hand.

By logical extension of that principle, it is also the case that "table stakes" means that you can only win from each opponent the amount that you have in front of you at the beginning of the hand, and, conversely, you only put that amount at risk.

Taking the larger view, I'd say that the requirement to keep your winnings in play is a small price to pay for not having to call somebody's bet of his fancy sports car by throwing the deed to your house into the pot.

Or the available balance on your Visa card.