His and Hers Poker: A Small Price to Pay 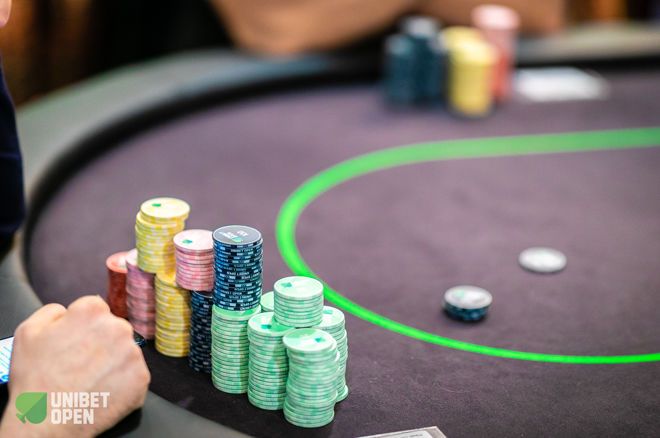 Hello, Poker Friends! After a little holiday break, we're back at it with a hand illustrating the consequences of small bet sizing.

Hero (Matt) is at a $2/$5 table at the Borgata. The main Villain in the hand is a loose and aggressive player in his early 20s. He has been opening rather wide from all positions. Most notably, he will open overly wide from early position, but will vary his opening size based upon the strength of his holding.

Postflop, Villain tends to play his strong hands fast. He has been caught bluffing on at least two occasions in as many hours, including one attempted river bluff.

Villain opens to $15 from under the gun. It folds around to Hero in the small blind who three-bets to $55 with

Normally, my bare minimum three-bet sizing when out of position is four times the opening. When the opening sizing is particularly small (as here), I will often increase my three-bet sizing even further to ensure that there is not an ambitious cold call from the big blind. So my default sizing in this spot would normally be around $75.

In this hand, I decided to override that default because of the sizing tell I had picked up from the Villain. His $15 opening size is indicative of a weaker hand which my

is very likely crushing. The last thing I want to do is bet huge and generate a fold from his worse holdings. It's okay to have default preflop bet sizings, but always be prepared to call an audible if the situation dictates.

As the three-bettor, the first thing to do when the flop comes down is to analyze the interaction of the flop with the ranges of the remaining players. We are looking for two elements: (1) who has more / better one-pair hands, and (2) who has more premium hands.

Here, both players can have A-Q in their ranges, but only Hero has A-A and K-K. Only Hero should have Q-Q also, but only Villain should have 5-5 and 4-4. It's possible that Villain has 5-4-suited, but that's pretty loose, even for him.

I would summarize by saying that Hero has a slight overall range advantage, mostly due to having the overpairs. In such a spot in a three-bet pot, it is often a good play to make a small bet with one's entire three-bet range. That's particularly true on a dry board like this, where a lack of natural bluffs would make it difficult properly split Hero's range properly.

, for a turn board of

An ace or king is always a game changing turn card in a three-bet pot. The three-bettor suddenly gains a massive range advantage boost due to the 12 combos of A-K and 3 combos of sets in the three-bettors range that are likely absent from the other player's range.

In what is already a condensed three-bet range, suddenly picking up 15 top-pair-plus combos is a huge swing. When Hero's range is this far into the value end of the spectrum, he should be betting small if he wishes to be balanced. There are times when an exploitative deviation might be advisable, but this is not one of them. The simple fact is that Villain's range is full of queens that we don't want to scare off with a large bet.

, for a final board of

. Hero bets $125. Villain raises to $425. Hero tanks for a while and then finally makes the call. Villain tables

on the river should change very little. Hero's range is still well ahead of Villain's on a board with very few bricked draws. So a small bet sizing is still warranted to attempt to generate a curious call from Villain's queens.

Once Villain raises, we now have to decide if he has sufficient bluffs to warrant a call. Against a passive opponent, we could make a highly exploitative fold. Here, we don't get off that easy. We know from past hands that Villain is capable of bluffing on the river. We also need to realize that we may have induced Villain to bluff by making three straight streets of small bets.

We begin by noting that Villain didn't raise on flop or turn. In the past, we've seen Villain play his strong value hands fast. That means that he is mostly representing a holding which was massively helped by the

on the river. What hands fall into that category? Very few.

By contrast, we should consider that our small sizing on the flop may have caused Villain to float with backdoor club draws which then also called on the turn. If we had used a larger sizing, that might not be the case. But when we went small, there's probably far more missed club backdoor draws in this loose Villain's range than holdings which interact with the

. In real time, this thought process, along with the lack of a club in my hand (to block the missed draw) generated the call.

If we also add in half of the combos of 5-5, 4-4, K-Q and 5-4-suited to simulate Villain slow playing these some portion of the time, we still win at 26.1 percent frequency. That is all assuming that this aggressive Villain doesn't turn things like

into a bluff on the river. If he does, then our winning percentage only goes up.

In hindsight, while Hero lost, we can see that the above ranging is probably on the conservative side. Villain opened UTG and called a three-bet with

. Hero's small bet sizing then caused Villain to call two streets with nothing but a pair of fours. All of this likely means that he has even more junk in his river range than we even considered above, much of which he would likely turn into a bluff.

Using a small bet sizing may generate some very speculative calls from loose opponents. If those opponents are also aggressive, you will need to be prepared to defend at a healthy rate against river bluff raises induced by your small bets.

If your opponent shows up with some oddball winning hand, don't be discouraged. This is the price you have to pay sometimes for betting small. However, the line is overall very +EV if you can get someone to call all the way to the river with fourth pair in a three-bet pot.

His and Hers Poker is a free, weekly strategy podcast hosted by Matt and Tracey Waldt. They are a married couple who play live cash games on the East Coast. Their podcast focuses on providing practical advice about hand reading, with an emphasis on how to identify and exploit the common leaks and imbalances of low-stakes players. His and Hers Poker can be found on iTunes, Google Play and other podcast services. For more information, and to subscribe, please visit hisandherspoker.com.

Counting the Combos: An Exercise in Range Narrowing