Keeping a Bounty in Play in a Progressive Knockout Tournament 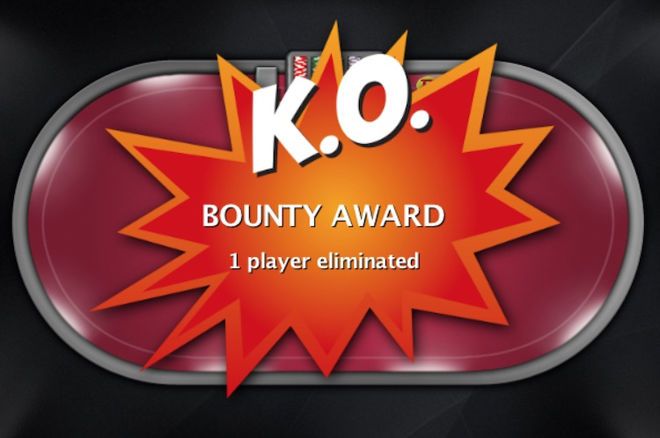 Almost all "knockout" tournaments played online these days are "progressive knockouts" in which the value of the bounty isn't fixed but can increase and thus remain relevant throughout the tournament.

Because of this factor, sometimes in these events we might want to modify our play in multi-way pots to keep in a player that we cover, instead of isolating a player who covers us. That means when we have a hand that can go either way, we almost certainly want to avoid driving a covered player out — a strategy that perhaps goes against what we might prefer to do in non-bounty tournaments or cash games.

Here's an example of an actual hand played in a $55 buy-in, six-handed no-limit hold'em tournament played as a progressive knockout that illustrates how the bounties can affect strategic decisions.

Choosing Not to Squeeze

. It's the middle stage of the tournament — before the money when the "regular" prize pool will start being divided, but when bounties are in play as they always are.

A player of average skill opens the pot for 2.5x BB from under the gun, gets called in middle position by the weakest player at the table who has 30 BBs, and the button calls as well. The small blind gets out of the way and it comes to us in the big blind. The initial raiser and the button both cover our stack.

Therefore, though squeezing might be tempting here in a freezeout, in a knockout tournament with significantly large bounties, it is inadvisable. We call.

giving us the nut-flush draw.

We have hit this board very hard, but we still need to decide what course of action will return us the most money. Leading out could elicit a raise from the initial raiser's strongest hands, which would shut our target out of the pot. We would also be left playing against a strong range that covers us.

We have equity that cannot be dominated, but on the other hand, we best dominate weaker ranges that include dominated draws. Looking past the UTG player who opened preflop, our weak middle-position player (whom we cover and who has a weaker range) and the button (with the weakest range of the three) can each have some J-9, Q-J, and 9-7 combos and 6-5 straight draws that we dominate, as well as inferior flush draws. So we check.

Sometimes calling with multiple players behind is strong. All other things equal, it should be. But this does not seem like such a situation. Our recreational target would probably have raised a set or two pair here. A big combination draw,

, likely would also raise. Therefore his hand seems quite weak. He is drawing or has a made hand of poor strength, something like T-9 or 5-5 or A-8.

Meanwhile the initial raiser did continuation bet into three people, but he also only bet one-quarter pot. A betting range that required protection would likely have bet larger, but nevertheless our logic from preflop remains the same — if we raise now we unduly pressure the player we cover in order to play for only chips (and no bounty) against a stronger range.

When the middle position player stays in the pot, our efforts are overlayed by his bounty. When he folds, we are playing for chips with the risk of elimination, shutting us out of the prize pool. In other words, we have some small ICM pressure whereas our covering opponent is getting a bonus to play for all our chips. The differences here are severe, not subtle.

While raising the flop is tempting, we once again call with our nut-flush draw. We expect to never be shut out of the pot on the turn. We can turn a pair, a straight draw, and of course the nuts. And indeed, the turn card is the

to give us our flush.

Once again we check. The initial raiser now double-barrels for two-thirds pot, a very sizeable bet. The recreational player calls the bet for about 40 percent of his stack.

At this point there is little left for us to decide but to move all in. Once we do, we actually get called in both spots. The initial raiser has

for a set of fours. The recreational player has

, having called off with a jack-high flush draw and an open-ended straight draw, both drawing dead. After the

river we earned both a bounty and a near triple-up.

It is interesting to consider whether the early position player should bet the turn. At first glance it may seem ambitious. But on the other hand, were he ever somehow behind a better set, he probably would have been raised on the turn.

Thus if he bets his hand on the turn, he gets value from parts of his opponent's ranges such as J-9. But remember, he also covers both players still in the pot. So he is always going to be priced in to call off and try to hit his 10-outer to fill up versus a straight or flush.

Since better sets are not in either opponent's range, he can bet knowing he is always live if behind. It might not be the best spot — it certainly is not a great spot — but when you are drawing live to 20 percent equity at worst, and with a bounty or two in play, it is hard to go wrong.

In any case, it's plain how the prospect of obtaining bounties — especially the bigger ones that occur during the middle and late stages of progressive KOs — should be taken into account, especially in multi-way hands like this one.

Mahjong Exchange: the Only Online Mahjong Game that Matters

How Poker is Uniquely Different From Other Competitions