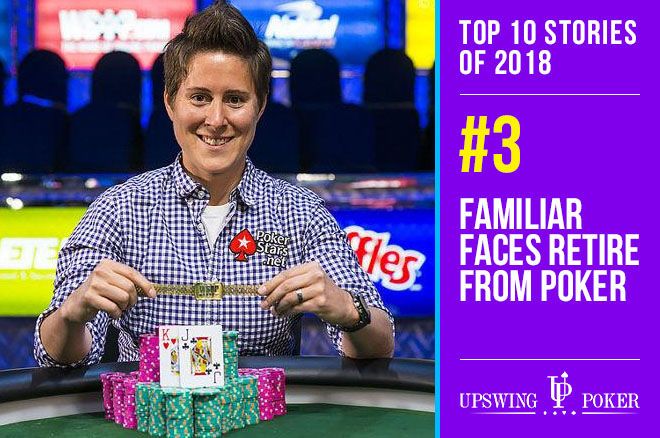 Poker is a zero-sum game of winners and losers. Similarly, for every breakout player each year, there are usually others that fall to the wayside. This year, that included some big names giving up the game. Call it retirement or what have you, the long and short of it is that a handful of notables left poker in the rearview to pursue other passions.

"Poker has given me so much over the last 12 years," she wrote. "It has been intellectually challenging, exhilarating, fun, and extremely rewarding. It has given me the opportunity to travel to places I might never have experienced, and forge friendships with people from all over the world."

The three-time World Series of Poker bracelet winner had racked up over $11.8 million in lifetime earnings and was still among the most popular players in the world. So why did she want to leave the game?

"The shift in the nature of poker and what it requires put me at a crossroads and asked the question of me whether I would rather change my relationship to the game or move on," she wrote. "To me, the opportunity to work hard and learn something totally new and get to keep poker in my arsenal of fun go-to hobbies feels like the right approach."

Instead of the exhausting grind, which included a lot of time on the road, Selbst decided to try her hand at a new hedge fund career at Bridgewater Associates. She was even profiled in the New York Times for her switch from poker to the world of investments.

Later in the year, Selbst caught some flak for playing down at the SHRPO after announcing her “retirement.” However, she made it clear that while she retired from being a full-time poker pro, she still planned to play from time to time.

That included firing the 2018 WSOP Main Event where she made an early exit and was highly criticized by certain segments of the poker world.

In response, Selbst tweeted: “I wish I could ignore people’s tweets but this irks me so much. Everyone who posted here is epitomizing exactly what is wrong with poker these days. Why it’s no fun for amateurs anymore. Basically, it just boils down to you’re kind of a bunch of a******s, pls stop.”

For the better part of a decade, any time there was a major poker event Jason Mercier would be there. Few players grinded as hard as the longtime PokerStars Team Pro. However, when he was conspicuously absent from the 2018 PCA, something seemed amiss.

Lo and behold, within days Mercier released an announcement on the PokerStars Blog revealing that he was leaving the team and scaling back on poker. The reason – to spend more time with his wife, Natasha Barbour, and their newborn son, Marco Henry Mercier, who was born a few months earlier on October 6, 2017.

Mercier: "My most important concern now, and my priority, is being a full-time father and husband.”

As Mercier put it: “My life was changed forever that day and for the better. Becoming a parent brings about a complete transformation of who you are. I no longer let myself be so concerned with what I want, but more so the well-being of my wife and my child (and future children). Serving and leading my family is of utmost importance.”

However, Mercier wasn’t giving up poker for good.

“Just to be clear, I'm not retiring from poker by any means,” he clarified. “Not only will I be back at the PCA next year and look forward to playing the PokerStars Player Championship, I still plan to play all the big Florida series events … But my most important concern now, and my priority, is being a full-time father and husband.”

Doug Polk Sets His Sights on the Mainstream

In late September, one of the founders of Upswing Poker – the sponsor of our year-end top 10 stories – Doug Polk completed his $100-to-$10,000 Bankroll Challenge and followed it up by announcing his retirement from the game.

“I’m not going to play poker anymore,” he said. “That’s a chapter in my life’s story that’s coming to a close. I had a great time, I had a blast. Poker’s given me so much. It’s a great game. It’s truly amazing to me there’s a strategic game you can play for a lot of money.

Polk: "For quite some time now I have not enjoyed playing poker. It’s felt like a grind, it’s felt like work.”

He continued: “For quite some time now I have not enjoyed playing poker. It’s felt like a grind, it’s felt like work.”

Even at just 29 years old, Polk was a veteran of the industry. However, his passion for poker waned while his enthusiasm for videos and cryptocurrencies grew. For all intents and purposes, he wanted to spread his wings and fly outside the poker world.

“This doesn’t mean I’m never going to play poker again,” he said in the video. “I’ll probably play occasionally from time to time for fun. Maybe, at some point down the road, it will be something that I really want to get back into, and the flame will reignite and I want to play a lot of poker, I really don’t know.”

Since his video announcement, Polk has steered clear of poker events, which included missing out on the $300,000 Super High Roller Bowl.

Godfather of Poker Done with Tournaments

During the 2018 WSOP, 10-time bracelet winner Doyle Brunson made a rare appearance at the Rio to play in the $10,000 NL 2-7 Single Draw tournament.

“I’m planning on retiring after the summer. My wife is not in very good health, and I will stay with her for the duration of either her life or mine,” Brunson told reporters and shocked the poker world.

Reports of his retirement spread like wildfire, but he later clarified he was only referring to tournament play and was assuredly still going to play the high-stakes cash games in Vegas.

“At this point, my mind is still at 80-90% of where it once was. I enjoy poker and I still win, and that’s my barometer. I still feel great, I feel like I’m 30 years old, except for my body. My body is breaking down, which I guess is normal, and it would be nice to win another bracelet. I don’t have many more opportunities, and in fact, this might be might be my last tournament ever.”

Brunson’s last hurray at the WSOP ended with a sixth-place finish for $43,963. It was his first WSOP cash since 2013.

Frankenberger Heads Back to Wall Street

A week before Polk announced his withdrawal from poker, two-time bracelet winner and WPT Season IX Player of the Year Andy Frankenberger revealed he was giving up poker to go back to his former career.

I’m heading back to Wall Street!! After an exciting, rewarding 8 years playing poker, I decided to rejoin my former… https://t.co/qxfV5AIwz8

Two other poker pros to make retirement announcements were 2010 PCA champ Harrison Gimbel and the opinionated and polarizing Cate Hall.

However, four months later Gimbel was at a WPT and seemingly back at it.

Gimbel notched 10 cashes throughout 2018, so his retirement may not be as permanent as the others.

Likewise, Cate Hall tweeted about leaving the game behind and seemingly did.

After a long time away and a short time back, I’m finding it very easy to see how bad poker is for my brain. I gues… https://t.co/Hw4MaeQIw0

After stellar years in 2016 and 2017, Hall had just one cash in 2018, which was an eighth-place finish in the WSOP Marathon for $65,875. She also recently retired from Twitter by deleting her account.