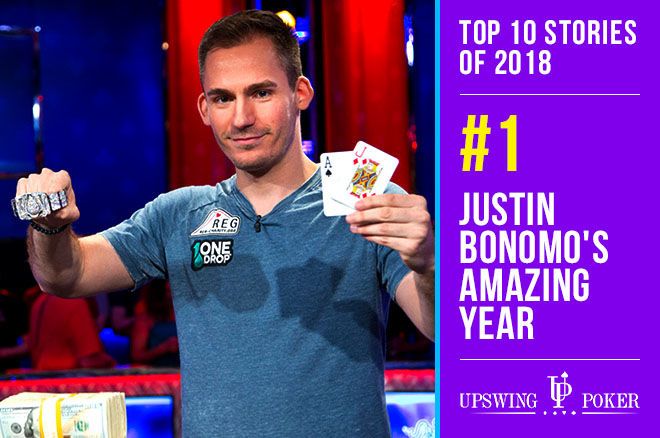 When 2018 is reviewed by Justin Bonomo, poker's record-breaking all-time money list leader might well struggle to believe it really all happened. But that Bonomo's phenomenally successful year of titles all happened within twelve months is nothing short of a miracle. Players work for decades to earn just a fraction of what Bonomo has won in 2018, and with each new success, each crowning glory gave him that much more impetus.

Bonomo's year started with a runner-up finish to Cary Katz in the PCA $100,000 for $1,077,800. Not much later, he took home two titles; the $25,500 No Limit Hold'em High Roller event Lucky Hearts Poker Open ($556,873) and the U.S. Poker Open $10,000 No Limit Hold'em Event, which he won for $190,400. But it was only just beginning. Bonomo flew to Macau, and won the Super High Roller Bowl in China for $4.8 Million. At the time, that was Bonomo's biggest ever tournament result, but by the end of the year, it wouldn't be worth half his largest. Macau was the setting for his defeat of Patrik Antonius to take the title, and Bonomo had already won well over $5.5 million.

The World Series of Poker was now in his sights, and Bonomo went into the world's biggest poker festival in great form, heading to Vegas with six cashes in mainland Europe totalling $1.5m, including two more titles, this time on the riviera in Monte Carlo on the European Poker Tour.
To Vegas Bonomo went, not knowing that it would become a summer he would never forget.

With the World Series of Poker yet to start, Bonomo played the $300,000 buy-in Super High Roller Bowl. He won it, beating Daniel Negreanu heads-up, adding another $5 million with the entire WSOP schedule still to come.

Heading into the World Series of Poker, Bonomo had already banked $13 million. But he was far from finished. Unsatisfied with demolishing large fields table by table, Bonomo took on the best of the best in the $10,000 Heads-Up Championship, winning that too. Having put over $14.5 million into the coffers in less than six months of poker, Bonomo was almost as stunned as us when he spoke to PokerNews and declared: "I think that this is not real life and I think that’s the secret."

Bonomo took time out from lifting trophies to cash four more times as a warm-up to another big one. Specifically, The Big One for One Drop. Going into the tournament as favourite, Bonomo lived with the pressure that put him under and came out on top again, this time defeating 2016 wunderkind Fedor Holz heads-up. The German banked $6 million, a fantastic result. But Bonomo walked away with his biggest prize to date, an astonishing $10 million. After an almost surreal streak, Bonomo was humbled by the magnitude of his achievement.

"At the end of the day, I feel like for the past year I've played absolutely fantastic poker," he said. "I'm not going to say I'm the best player in the world but I'm very confident that I'm up there."

We are confident he's the best in the world right now, and so are most people in and around poker. While an amazing 24 players have enjoyed a year in which they won over $5 million, a staggering achievement for the popularity of poker itself, one man stood out as having achieved greatness. At the close of the year, Bonomo leads the All-Time Money List, ahead of Daniel Negreanu, the man he beat in the Super High Roller Bowl in May and who had topped the list since 2014. Negreanu's reign is over, and quite how long Bonomo will hold the lead is anyone's guess.

Justin Bonomo will be remembered as a phenomenally successful player whenever he retires from tournament poker, but 2018 will always be remembered as the Year of Bonomo. Quite simply, it was his from start to finish.

* All data courtesy of TheHendonMob.com