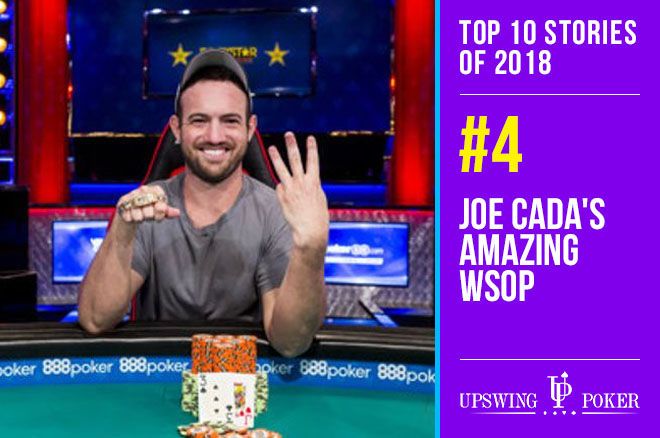 Navigating through a field of thousands of players in a poker tournament is a tall task, and one that is mathematically unlikely no matter how good a player you are. But to do it twice within a decade is nearly impossible.

For that reason, 2009 WSOP Main Event champ Joe Cada’s fifth-place finish in the 2018 WSOP Main Event is one of the spectacular feats in poker. Combine that with two bracelet wins in the same summer and boom – you have a PokerNews 2018 Top Ten story.

When asked to what he attributed the great run over the summer, the calm and collected Cada responded: “I guess just being on the good side of variance… I ran good, played fundamentally sound, wasn’t trying to get too creative.”

A Summer to Remember

It’s always nice to start the long WSOP summer grind out with a cash, and that’s exactly what Cada did. His ninth-place finish in the $10,000 No-Limit Hold’em Super Turbo Bounty was good for nearly triple his buy-in, and Cada was off to a good start.

He wasted no time hopping in the next event, following up his Turbo run by registering for the $3,000 No-Limit Hold’em Shootout the very next day. Two days later, he had clinched bracelet no. 3, added $226,218 to his summer cashes tally, and found himself freerolling the summer before the end of week one.

From there, the cashes kept coming for Cada, with three more small ones in June before the Main Event kicked off in early July. And he wasn’t even close to done yet.

But still, the highlight of his WSOP before his deep Main Event run had nothing to do with cashing events or banking six-figure scores.

Cada’s father, Jerry, was recovering from a stroke that had put him in a coma for over a month and in recent months, Joe had been teaching his dad poker – an activity he enjoys that he can do in the chair he’s confined to. The elder Cada was doing well enough in June to come out and play in the Seniors and Super Seniors events, and his son was happy to put him in.

“That was the highlight of my summer before the Main Event,” said Joe. “My dad getting to play the Seniors and Super Seniors – he had a blast.”

His mom, at least mildly interested in poker, wasn't left out of the family poker fun.

“She always trusted me and knew I was good with math," Cada said of his mother's support. "She had faith and I reward her for that faith.”

The mother-son duo played the $1,000 Tag Team event, which was perfect since the structure allowed for his mom to get up from the table and take breaks when she wanted to. For Cada, having his parents come out to the WSOP and participate was something he treasured.

Dodging Bullets in the Main Event

In 2009, Cada beat out a field of 6,494 players and a final table that included Phil Ivey, Jeff Shulman and his heads-up opponent, Darvin Moon. Cada was 21 years and 11 months old at the time, making him the youngest player ever to win the Main Event.

Nine years later, Cada says he’s grown a lot in poker, and that newfound maturity contributes to more patience and awareness at the table. He’s well aware of what it takes to last in the Main Event, and he used that knowledge to grind a short stack for most of the 2018 edition.

He told PokerNews before the final table started that he was down to 9,000 chips at one point and had around one-fifth of average chips for most of the way. But he stayed patient and stuck with his strategy.

“I just had to pick my spots and try to shove on people that were raising too much and just try to pick up some hands."

A tweet from Cada during the 2017 Main Event gives some insight into the mindset that helps him in the longest form of tournament poker there is.

So many morally defeated players in the Main Event when they lose greater then 20 percent of the starting stack. Week long grind PPL!

For Cada, being short-stacked in the Main Event is no reason to give up hope. He talks about being down to three big blinds in the big blind with seven left in the 2009 Main Event final table. The player on the button decided to open-fold an ace and when the small blind went all in with three-four offsuit, Cada called with jack-four and won with jack-high, proceeding to win the tournament from there.

“The simple decision of someone folding an ace on the button… It makes me realize the chain of effects of things, how things could easily have taken a different path and small decisions really add up.”

In the 2018 Main Event, Cada described having played multiple hands early on where if opponents played their hands faster or differently, he could have been out of the tournament. One such hand was a critical one for Cada, where the button raised and he shoved 15 bigs from the blinds with ace-nine on Day 4 or 5. His opponent folded ace-queen face-up and Cada survived the hand without being put at risk.

“A lot of little things went my way,” said Cada.

While his opponent may have had his strategic reasons for folding the ace-queen, Cada is pretty sure it was due at least in part to the fact that he had been friendly with the guy – not as some rouse to get soft-played, but rather, just to be a good person and make the atmosphere more fun and social.

“It’s just like in real life; no one likes assholes.”

Fearless Style Late in the Main

Possibly because he’s been there before, or because he’s played millions of hands online, or a combination of the two, Cada got a reputation of being on the aggressive side in the late stages of the Main Event. But for Cada, it’s just a matter of adjusting to the situation at the table.

“Sometimes the table doesn’t call for more risk. There are so many variables, so based on images, storyline of the hand, I don’t just go for it; it has to add up in my mind for a calculated risk to take place.”

During his Main Event run, plenty of situations called for some calculated risk in Cada’s mind, including with two tables left nearing the final table bubble. With pay jumps still flat until the final table, Cada saw an opportunity to apply pressure to players just trying to wait it out and get to the final table.

With 15 left, Cada three-bet shoved 17 big blinds with ace-six of hearts over Frederik Jensen’s open and Jensen called with ace-ten. Despite having Cada dominated, Frederik lost the hand when three hearts ran out on the board to give Cada a flush for the double-up.

In another key hand, 11 players remained and Cada put it all on the line with a triple-barrel bluff with ace-high on the button and got Alex Lynskey to fold his top pair to a river shove. You can watch the hand in the following clip:

The bluff of the Main Event from @cada99! 2009 @WSOP champion has chips and is a few spots from the final table. Wa… https://t.co/YlULqxi3No

Cada was able to chip up significantly near the final table bubble to begin the final nine-handed table sixth of nine in chips. Unable to get a run going after surviving the first day of eliminations, Cada got it in with pocket tens and was looked up by Tony Miles who held ace-king. A king on the flop and no ten on the board spelled the end for Cada’s repeat bid.

His run may have ended before he would have liked, with a fifth-place finish, but $2.15 million is a pretty good consolation prize, especially when you know there were many moments throughout where you could have busted much earlier.

True to his even-keeled personality, Cada didn’t tilt or rage or dust off money in the pits following his elimination. Instead, he did what any true grinder playing his best poker would do: ask his girlfriend if she was okay with him playing one more event before heading back to their home in Michigan.

On To the Next One

Many players talk about the sick or tilted feeling that can result after busting out of the Main Event, even once you’ve reached the final table. But for Cada, it’s just part of the game. He had no regrets, no feeling of tilt – just peace after losing his last flip.

“I couldn’t have felt any better busting the Main… I had my run in 2009; I ran really good at that final table. I just thought ‘hey, I’m due to lose one of these,’ and these are all good guys – it’s their time. Plus I could have been out earlier many times so you just shrug off the last one. Okay, on to the next tournament.’”

Despite his continued success on the felt, Cada keeps a low profile in poker, mostly choosing to stay home in Michigan rather than venture out for live events on the WSOP off-season.

The 31-year-old has been a poker player for more than half his life, getting into online poker at the ripe young age of about 14 or 15. Some kids played video games or went to the movies; young Joe Cada was grinding $0.10/$0.20.

Since his big 2009 win, he's gotten away from grinding online for 50-60 hours a week like he used to and has found more balance in life as a result. Apart from going to the WSOP in the summer and traveling for a couple other poker-related trips throughout the year, Cada mostly hangs out in Michigan with his girlfriend and his two dogs and plays $10/$20 NLH and PLO cash games online where he can find them.

“No nosebleeds,” Cada said when asked about the stakes he plays. “I don’t want to cause stress in life going through big downswings.”

While we may not see him moving up in stakes or playing in Super High Rollers any time soon, there’s one poker trip you can count on him making annually.

“I just enjoy the WSOP. I get to see friends I don’t usually see, friends that moved out to Vegas. I like that every day there’s a different tournament – just lots of tournaments over an extended period. Plus after growing up watching it on TV, the image, what it stands for, the whole aspect of playing it is really fun to me. I plan to do it every year.”

Cada may not have any goals in poker, per se, but if last summer is any indication, he'll likely be adding to his collection of gold for years to come.