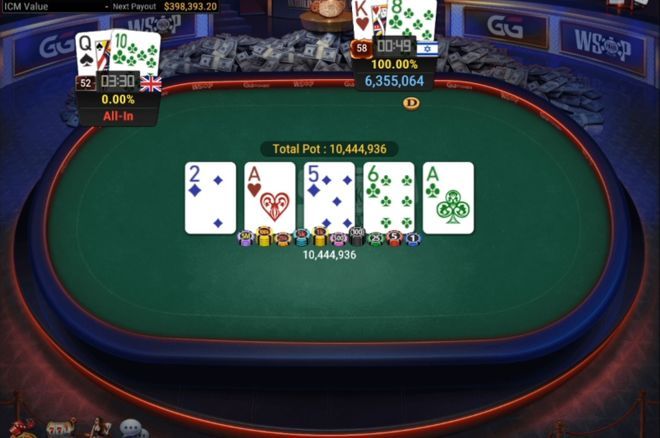 Ravid "jerbi9999" Garbi of Israel has won his first bracelet in Event #58: $5,000 No Limit Hold'em 6-Handed Championship. Garbi battled his way through a 672-entry field to end up heads-up against bracelet winner Chris Moorman. He ultimately denied the British online legend his second bracelet to win his first gold and the first-place prize of $531,513. Moorman received $398,393 for finishing runner-up.

This is by far Garbi's biggest lifetime score to date. The Israeli's lifetime live earnings on The Hendon Mob top at just $29,132, and while this is the third cash for Garbi during this GGPoker World Series of Poker (WSOP) Online series, it's the first time he's gotten to the final 100. Needless to say, the third time ended up being the charm.

Plenty of crushers ran deep in the event, such as Norwegian high roller Preben Stokkan who completed the podium and won $292,021. Popular pro Ludovic "Gr4vyB04t" Geilich finished fifth for $156,898, Mikita Badziakouski finished seventh for $84,299, and an earlier bracelet winner this series, Hun Lee, ended up in eight place worth $61,791.

Check out full live reporting of this event!

Event #58: $5,000 No Limit Hold'em 6-Handed Championship drew 672 entries total, creating a juicy $3,193,000 prize pool to be split 92 ways. Action was fast and furious throughout the tournament, and players didn't take long getting into the money stages.

Kathy "YouMakeMeWet" Sathaphan ended up bubbling, leaving the remaining 98 players guaranteed $10,721. Once the bubble burst, things really took off. Less than an hour later, GGPoker's Daniel Negreanu, again making a deep run this summer, ended up in 39th place for $14,599 when he ran an ace into the pocket sevens of Viktor Kudinov.

Along the way, Brandon Adams, Connor Drinan, Ami Barer, David Peters, and Bertrand "ElkY" Grospellier dropped by the wayside, but with money for their collective efforts.

READ MORE: How to Play the GGPoker 2020 WSOP Online on a Budget

Things didn't really slow down until they got to 12 remaining, about an hour later. After Davidi Kitai fell in 12th place, it took nearly another hour before GGPoker streamer Michiel "Easterdamnz" Van Elsacker busted running sixes into the sevens of Ludovic "Gr4vyB04t" Geilich. A few minutes later, Francisco "VaPaCooler" Benitez got eliminated to set the final table of nine, a staple of the GGPoker series despite the format being 6-handed.

That set up a two hour final table including the $10K Short Deck runner-up Mikita Badziakouski, Moorman and Geilich. They played nine-handed for almost an hour before the dam broke, and Alan "TheCockroach" Schein, Hun Wei Lee, Badziakouski, and Shyngis "somebodyelse" Satubayev were flushed out in short order.

Down to five, Geilich was next to go when his ace-high couldn't hold against Urmo "PidrPan" Velvelt, but it was the latter finishing fourth just a few minutes later. Preben Stokkan dropped out a few minutes later by shoving ace-seven into Garbi's aces to set up the heads-up clash.

Moorman and Garbi played heads up for about 30 minutes, where the Brit chipped back up from an initial deficit to even the stacks and take the lead. He dropped back again, then doubled into the lead on a cooler that saw Moorman flop top boat against the trip queens of Garbi.

But Garbi came back swinging with a huge double of his own when he flopped the flush against Moorman. That left Moorman short-stacked, and his money went in soon after when he called off a shove from Garbi with queen-ten. Garbi held king-eight and five blanks later, it was all over. Moorman took second for almost $400K, adding to his countless live and online winnings. The $531,513 win was a bigger deal for Garbi as it was his biggest lifetime score and first bracelet.

The 2020 Online World Series of Poker rolls on Wednesday with Event #59: $2,500 Double Stack No Limit Hold'em. Make sure to return to PokerNews and not miss out on the latest updates as the WSOP on GGPoker is at the halfway point.