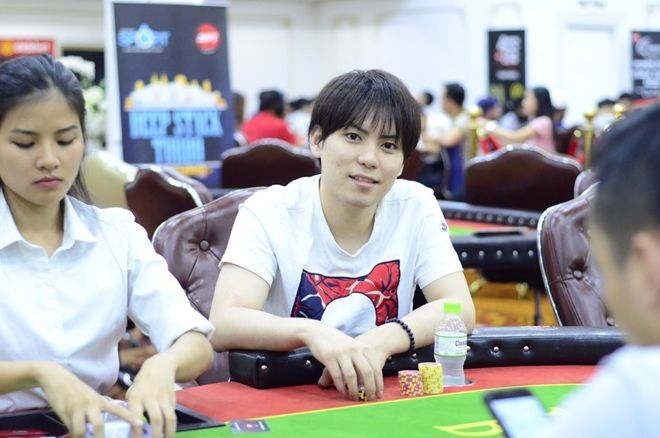 It was a night to remember on GGPoker as their first-ever WSOP bracelet events — part of a 54-event schedule spread out across the next months — kicked off. Unfortunately, on a night where three bracelet winners were supposed to be crowned, two of the events ran into a critical bug and had to be suspended to next week.

The lightning-fast Event #34: $525 Super Turbo Bounty No-Limit Hold'em 6-Handed — clocking in at a mere 3 hours and 15 minutes start to finish to make it the fastest-ever bracelet event — was unaffected by the technical issues and played out as normal. In total, 2,214 entries of $525 each were made to create a total prize pool of $1,107,000.

In the end, it was Shoma "pp_syon" Ishikawa of Japan writing history as GGPoker's first-ever online bracelet winner, as well as the third person from Japan after Naoya Kihara and Takahiro Nakai to claim the coveted prize. Ishikawa is an emerging talent from the land of the rising sun with $34,238 in lifetime cashes according to The Hendon Mob, all made in South Korea and Vietnam.

Perhaps the perfect embodiment of what the WSOP and GGPoker are trying to do with this series, making online bracelets accessible for those outside the normal confinements of Nevada and New Jersey, Ishikawa has no prior cashes at the WSOP. Now, in just a little over three hours, he has spun two bullets of $525 up into a payday of $117,650 and a WSOP gold bracelet, and will have his name be a part of poker trivia for years to come.

Plenty of notables showed up to play and among those to run deep and cash were GGPoker ambassador Fedor Holz, Mike McDonald, and streamer Scott "TTV_Pokerbrahs" Kenyon, with latter reaching the final four tables.

At the final table, which was reached not even three hours in, the nicknames of the players were removed and their real names were revealed on the spot. This showed WSOP bracelet winner Daniel Strelitz, playing as "Gyrocopter", as well as Dimitar "Mort" Yosifov among the final tablists.

It would be Yosifov to depart first, running ace-ten into Mulgyeol "waterwave" Kim's pocket threes and failing to improve. Kim couldn't enjoy the spoils of that for long as he was next to go, getting decimated by Diego "El Motron" Ostrovich before losing his final scraps to Gary "STARDOG13" Johnson.

Unsurprisingly, the pace remained furious and in a few hands, the field was down to four into the final break, with Ilya Anatsky, Tom "Pik00rs" Delaine, and Yulian "Ector" Bogdanov all falling in short order.

Strelitz would be the first to go next after the event had a rare breather with no eliminations for about ten hands. The last remaining bracelet winner in the field lost the race with nines against Ostrovich' jack-ten when the latter flopped a ten. Johnson followed him to the rail, being outkicked with ace-six against the Argentinian's ace-king and unable to improve.

READ MORE: How to Build Your WSOP Schedule: Top Events to Consider

Ostrovich took a substantial lead, as well as a far bigger progressive bounty, into the heads-up but it would be there where Ishikawa would shine. Winning a whopping seven hands in a row, the Japanese player turned it around and took all but three of Ostrovich' blinds in a big all in with ace-nine against king-ten.

The final hand was a formality: holding nine-six, Ishikawa shoved and Ostrovich called it off with five-three. The nine on the turn and a rivered flush for good measure gave Ishikawa the bracelet, as well as $117,650.

The next tournament on the schedule – Event #35: $5,000 Pot-Limit Omaha Championship – will take place at 2 p.m. GMT on Tuesday, while the suspended Opener and COVID Relief events will continue next Sunday. The PokerNews Live Reporting Team will cover every GGPoker WSOP bracelet event start-to-finish so make sure to check back regularly!