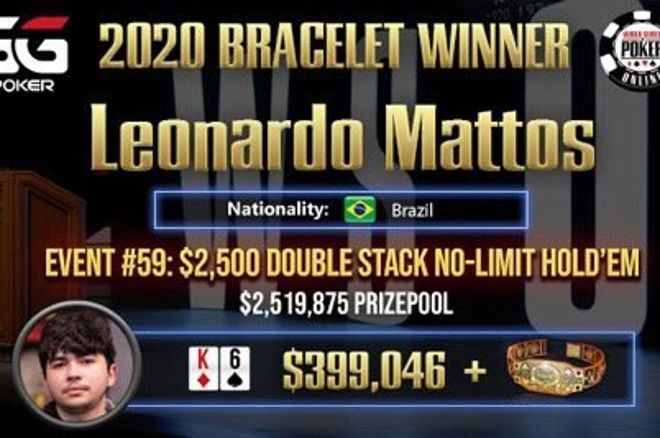 After almost eleven hours, Leonardo "Babaehduro" Mattos made it four for Brazil in the GGPoker WSOP Online Bracelet Events as he took down Event #59: $2,500 NLHE by beating Christopher "RambaZamba" Putz heads-up for $399,047, the coveted WSOP bracelet, and a WSOP Europe package. The tournament attracted 1,061 entries to create a total prize pool of $2,519,875 with 152 players walking away with money added to their bankrolls.

Mattos' biggest live cash was earned almost a year ago when he finished seventh in an event in Brazil for $98,713 while his biggest and only cash on the WSOP circuit came in Event #33: $1,111 Every 1 for Covid Relief [Caesars Cares] when he finished in 216th place for $2,508. With this result, he has surpassed all of his personal records as his previous biggest score on GGPoker was in a WSOP side event a few weeks ago when he won the $400 Sunday Deepstack for $56,047.

He follows in the footsteps of Marcelo "Marolo" Jakovljevic Pudla, Yuri Dzivielevski, and Luis "Xapilskinha" Assuncao Garla who all won an online bracelet to add to the tally of nine WSOP bracelets for Brazil in total.

Putz's cash also bests his personal record by over $100,000 as he has now surpassed the $500,000-mark in career earnings in live tournaments. This is also the case for Pedro "mrsweets29" Madeira, Nethanel "natykkk" Klein, Antonio "nanqtf" Pedro, and Kevin "withered350" Gibson. Fabiano "MarkyAurelio" Kovalski and Yiannis "GreekFreaker" Liperis have both had succes in the live circuit before with their cashes totalling over $2,000,000 already.

* plus a WSOP Europe Package

Read back how Mattos won this event with PokerNews live reporting

With players having the possibility to reenter twice during the late registration period, the action was hot and heavy from the start. When the registration period closed after 3.5 hours, there were only 340 players left out of the 1,061-strong field. It would only take another 90 minutes before the tournament reached the hand-for-hand stage for the bubble.

Mattos was actually responsible for bursting the bubble when he was sitting in the big blind and Patryk "weedsmoker93" Poterek was forced all-in from his ante. His jack-five held against Poterek's eight-trey to burst the bubble.

Daniel Negreanu busted at the same time when Thiago "grigopoker" Grigoletti rivered a straight against him for the slew of eliminations to start as the rest of the field had reached the money stages. It was another cash for "KidPoker", but bracelet #7 — or even a WSOP final table this year — remains elusive for the GGPoker ambassador.

I believe that makes 23 cashes this WSOP and not a single final table. Shit is getting weird bro!

Two hours later, the field had been reduced to only two tables but the pace of eliminations kept going. Bracelet winner Jonathan "Serenity" Dokler fell to Putz when he called the shove of the latter with king-seven, Putz's ace-king outkicked Dokler when they both turned a pair of kings to get the tournament to the final table bubble.

With lots of stalling as there was no hand-for-hand play, the shorter stacks also kept doubling up in the meantime until Daniel "Razer2311" Rezaei and Manuel "JOhn Mcclean" Saavedra both went all-in on their respective tables. But with a difference of a few seconds, Rezaei busted to Putz before Saavedra fell to Kovalski to get the tournament to an eight-handed final table.

It was a Brazilian feast at the final table as all but one elimination could be credited to either Mattos of Madeira. Liperis, Kovalski, and Gibson all busted to Madeira for him to cement his chip lead with Mattos hot on his heels. Mattos then took out Pedro before Madeira claimed Klein as his victim to get the tournament to three-handed play.

READ MORE: How to Play the GGPoker 2020 WSOP Online on a Budget

Putz was the absolute short stack at the table but battled his way back and ultimately took out Madeira after forty minutes with ace-king against pocket eights. An ace fell on the turn got him to the chip lead and heads-up battle. Putz put the pressure on with the bigger stack and whittled Mattos down, but the latter doubled up twice to take a 2:1 lead.

The heads-up battle of 30 minutes came to an end with Putz shoving with nine-eight for his last ten big blinds and getting called by Mattos who held king-six. No danger on the board for Mattos as he became the latest online WSOP bracelet winner.

PokerNews will be back on Thursday, August 13, to bring you coverage of Event #60: $525 Bounty No Limit Hold'em 6-Handed so make sure to return for all the exciting bounty action!