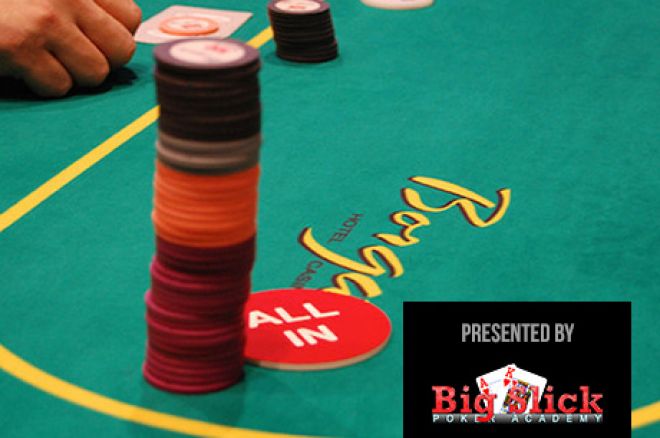 The PokerNews Top 10 Stories of 2014 is presented by Big Slick Poker Academy.

The Top 10 Stories of 2014 countdown continues with No. 5 on the list, when the game’s unspoken code of integrity was compromised by a conniving, yet admittedly clever, criminal armed with counterfeit chips.

PokerNews' assignment was relatively simple: observe the series’ tournaments firsthand and update running blogs with entries reflecting the lay of the land in each event. After the first two days of Event 1 were in the books, everything was going according to plan, but little did anybody know at the time that a player in the field had a plan of his own in the works.

When our team showed up for the pivotal Day 3 on Jan. 18, what happened next is something we sincerely hope no poker player ever has to experience again. The final 27 players in the field had assembled in the Borgata’s sprawling conference rooms charged with the energy that only a life-changing experience can impart. Each of them had survived the gauntlet of a massive 4,812-player field, locking up at least $8,140 for their deep runs, while also putting themselves on the precipice of a $372,123 payday — the prize awaiting for the eventual winner.

For all of their warts and wrinkles, poker tournaments typically run like some semblance of clockwork, with hundreds or even thousands of people showing up at a preset time and playing the game in orderly, organized fashion. So when the starting time for the third day of play came and went, three tables full of players sitting or standing expectantly while they waited, everyone immediately knew something strange was in the air. Sure enough, members of the Borgata’s corporate staff advised PokerNews reporters to post this announcement to the tournament blog, thus telling the poker world that a tournament with seven-figures in prize money at stake would be put on pause.

The players were informed in a contentious huddle-up led by Borgata representatives, and speculation swirled overnight before the bombshell finally dropped:

“Borgata announced today that the New Jersey Division of Gaming Enforcement (NJDGE) has ordered the cancellation of the first event of the Borgata Winter Poker Open due to a pending investigation.

"Thus far, investigators have found that one or more tournament entrants improperly introduced a significant number of counterfeit chips into the tournament, gaining an unfair advantage and compromising the integrity of play for the event."

With a few deceptively simply sentences the tournament had been cancelled, pending an internal investigation into suspicions that counterfeit chips had been introduced into the tournament at some point during the first two days of play. Suddenly subjected to the whims of scandal unprecedented in recent memory, the final 27 players were left in poker limbo — a situation that pro Nick Guagenti described in agonizing detail during the World Series of Poker this summer shortly after an eventual resolution was reached.

A few days later, the puzzle began to be patched together by New Jersey State Police and the NJDGE, and in late January they caught the suspected culprit: 42-year-old Christian Lusardi of Fayetteville, North Carolina. According to local authorities responsible for the investigation, a collection of counterfeit chips designed to replicate the tournament chips used by the Borgata were found in a clogged sewer pipe at nearby Harrah’s Resort and Casino in Atlantic City. Further inquiries confirmed that the Lusardi was staying in the room where the blockage originated, and he was soon arrested on charges that he illegally introduced the bogus chips into circulation at various instances during the tournament.

As Rich Ryan reported at the time of Lusardi’s arrest, he "left Harrah’s last weekend and a warrant was issued, charging him with rigging a publicly exhibited contest, criminal attempt, and theft by deception. He was found at an undisclosed motel in Atlantic City on Friday, and was taken to the Atlantic County Justice Facility. His bail is set at $300,000."

As it turned out, Lusardi was not a careful criminal, and when we reviewed our coverage from the event’s first two days of play his name appeared multiple times. One of Lusardi’s entries was noteworthy only in hindsight, as he caught our attention to make sure any coverage of his chip-leading stack resulted in a few brownie points with his better half. We didn't really think twice about Lusardi’s huge stack of chips, as runaway chip leaders often happen early on in massive-player fields, despite the fact that he bagged far and away more than any of the highly skilled pros in the room during any of the three Day 1 flights. Lusardi received a $2,000 cash bounty for topping the counts by the end of his flight, before busting out late on Day 2 to pocket an additional $6,000 and change. And in the end, that relatively meager haul may have cost Lusardi his reputation, thousands of dollars in fines, and most importantly, his freedom.

Lusardi was charged with rigging a publicly exhibited contest, criminal attempt, and theft by deception; and considering his documented history with criminal activity related to gambling, it is likely he will have the proverbial book thrown in his direction.

While Lusardi awaited word on his own fate, the final 27 players left in the tournament he destroyed were left in a similar spot: anxiously waiting to hear what the NJDGE would decide when it came to the event’s resumption, or resolution via payout. Days turned into weeks as the matter was examined by state gaming regulators, and by mid-April, NJDGE Director David Rebuck released an order directing the final payout and refund distribution for all of the 2,143 players deemed to have been affected by the tournament’s compromise. The Borgata released a statement detailing the payment structure, and as Chad Holloway reported in April, six players who stood among the final 27 soon filed suit against the casino claiming that the $19,323 represented compensation was not commensurate with their chip standing at the time of tournament’s cancellation. Holloway reported the following details after obtaining a copy of the complaint:

"According to the complaint obtained by PokerNews, the six players — Duane Haughton, Michael Sneideman, Cuong Tran, Alvin Vatanavan, Christopher Korres, and Cuong Phung — filed a Civil Action Complaint on Tuesday with the Superior Court of New Jersey through lawyers William H. Pillsbury and Maurice B. VerStandig of Offit Kurman, P.A.

The complaint alleges four counts against the Borgata — Negligence, Breach of Contract, Breach of Implied Contract, and Negligence Per Se — and seeks damages of $33,756.44 for each of the plaintiffs.

'The four counts each represent an independent cause of action against the Borgata, and each is independently meritorious in light of the egregiously inadequate means with which the Borgata operated the Winter Open,' said VerStandig. 'However, the damages sought are not cumulative, so at this time we are only seeking the pro rata chop value, plus interest and attorneys’ fees, on behalf of each plaintiff, and we are only asking the court to award this money once, regardless of there being four counts.'"

In addition to that legal action, a symptom of the poison Lusardi so casually introduced into poker’s previously balanced system, a class action lawsuit was filed on Feb. 24 in the Atlantic County Superior Court alleging "fraud and negligence on the part of Borgata and accuses the casino of failing to properly supervise the event."

Nearly a year has passed since the counterfeit chip scandal shook poker’s already fragile sense of moral stability to its core. And although players like Guagenti have moved on from the mess, one that may have cost them hundreds of thousands of dollars in hard-earned equity, many in the poker community still find themselves thinking about the scandal from time to time. The motivation for Lusardi’s audacious attempt to circumvent the system, the mechanics of his concealment and introduction methods, and the ideal endgame he envisioned are all fascinating subjects to ponder — especially during the inevitable periods of downtime one inevitably encounters in a poker room.

It’s likely that suitable explanations for those mysteries will never found, not with Lusardi languishing in a New Jersey jail cell. But for the players, dealers, and reporters on hand when he literally flushed a $2 million dollar prize pool down the toilet, the sight of a simple poker chip will never be quite the same again.

Be sure to stay tuned to PokerNews as we continue to count down the top stories from 2014.