Before the Game: Mike Sexton the Paratrooper (Part One) 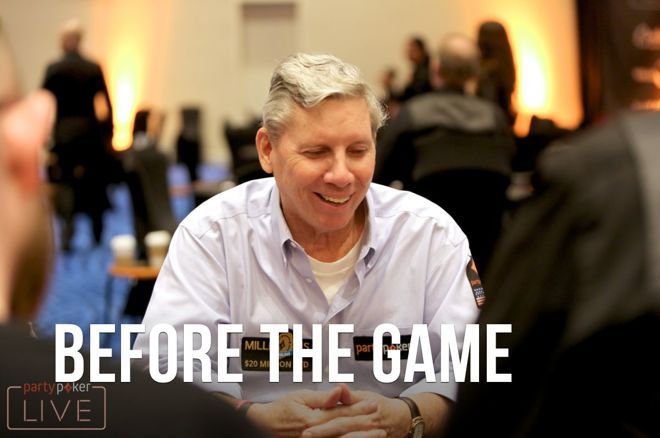 Mike Sexton is a living poker legend. He seems to have always been there in poker, part of the history of the game, but also at the forefront of modern change now, as partypoker Chairman. But Sexton wasn't always a cornerstone in the poker world; he had a whole life before poker. Sexton was in the army and taught ballroom dancing... Before the Game.

“When I got out of college, like most guys, I didn’t know what I wanted to do, but I was a gymnast in college," said Sexton. "I was doing flips and somersaults all my life. I always wanted to jump out of planes. I joined the army to become a paratrooper just so I could jump out of planes; it seemed like the next step for me.”

Joining up, Sexton went through jump school and was stationed with the 82nd Airborne Division.

“This was back in the Vietnam era and everybody told me I was crazy when I joined the army because I’d have to go to Vietnam. But when you’re young, you don’t think about those things. My attitude was ‘If I go, I go.’ But now, looking back on it, I was so lucky, because the 82nd had just come back from their second tour of Vietnam when I was stationed with them. I never left Fort Bragg.”

Sexton loved his life at Fort Bragg, with no threat of a war in a foreign country hanging over him and the option to jump out of planes right there for him whenever he wanted.

"I was doing flips and somersaults all my life. I always wanted to jump out of planes."

“I had a real cushy job and I loved the army. I came real close to re-enlisting and making it a career. The army was great, maybe because I never left Fort Bragg, had a soft job and could go out to the drop zone and jump any time I wanted to. It was fun for me and I thoroughly enjoyed it. But had I been stationed somewhere else, in a war zone, I would have had a completely different outlook.”

A high school gymnast he may have been, but it’s still a big leap, if you will, to becoming a paratrooper. So we wondered, what drives a man to want to jump out of a plane?

“It’s hard to say. People say, ‘You must be crazy to jump out of a perfectly good plane.’ It was just something I’d always wanted to do. I’ve never had a desire to do it again after I got out of the army! We didn’t do what they call 'freefall' - when you jump out of the plane, soar down for a while then pull your ripcord. When you’re in the army, you jump out at 1,500 feet - which is not very high up - and it opens the parachute for you automatically. You’re on a static line that opens up your parachute when you jump. Freefalling would be a lot more fun because it’s a lot higher up and you have a long way to freefall.”

There’s still an element of danger, with instructions needing to be followed very closely. In times of war, you can imagine the exaggerated pressure.

“I knew at some point I’d be shipped out of Fort Bragg and the easy life I loved there would be over."

“You’ve got to stay right behind the guy in front, otherwise you get yelled at. If you space yourselves out between jumps, then when you land on the ground, it would be hard to get your unit back together, so they try to keep the jumps as close together as they can. They try to get you out of the plane as fast as you can go.”

"I think it would be great for every high school kid to go into service, then get out, go to college, go into pro sports, but have done that already. I know how valuable that is, and how valuable it would be to most kids.”

Sexton enjoyed a couple years in the army and when the option to re-up was presented, he decided to try something new.

“I knew at some point I’d be shipped out of Fort Bragg and the easy life I loved there would be over. When I got out, I stayed in North Carolina, where Fort Bragg is, and I ended up getting married and getting a job there as a sales rep."

Poker and Other Jobs

Eventually, his old card playing hobby became a bigger part of his life. "I started playing home games and I loved playing poker. I’d played poker and bridge almost every day in college. I look back on it and tell people I majored in cards. I did better in the poker games than I did in the job.”

"I look back on [college] and tell people I majored in cards."

Before he got into poker full-time, Sexton played on the side as he worked. With his time in the service behind him, he decided to get a part-time job teaching gymnastics at the YMCA, but ended up putting to use another set of skills he had acquired in his youth.

“I used to teach for Arthur Murrays in Dayton, Ohio in the summertime because my parents were ballroom dance teachers and it was always part of my life. I met this guy who had a studio and he was a former Arthur Murray guy. He showed me a step list and said, ‘Do you recognize this?’ and I said ‘Sure.’ He knew I was looking for a job. He told me if I taught dancing for him, I’d make twice as much money as I would teaching at the YMCA. That was good enough for me.”

From paratrooper to sales rep and ballroom dance teacher, eventually, Sexton was winning so much in poker that when his marriage ended, he decided to dive into a new career in cards. Could Sexton turn a life playing poker into something more? Would fame and fortune beckon? To do so, he’d have to travel the breadth of the United States of America. Find out what happened next in Part Two of Before the Game.