Before the Game: Roberto Romanello the Restaurant Worker (Part One) 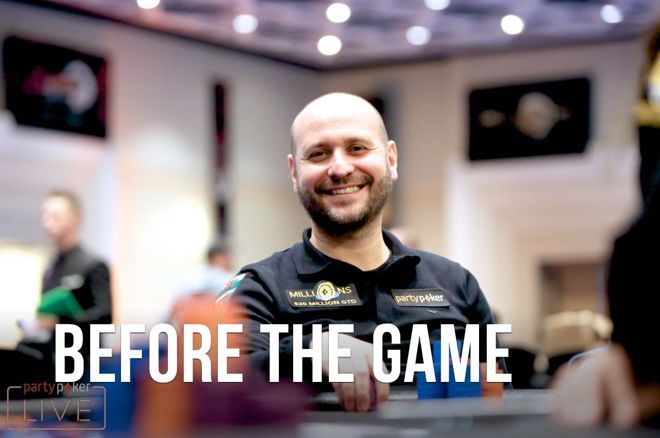 Welsh Wizard Roberto Romanello has enjoyed the kind of poker career that inspires players from all over the world. For a humble man with even humbler beginnings in South Wales, that was a long reach from where he started.

Romanello didn’t just have another career before poker came along, he had a quarter of a century living another life entirely. But the clues to his future poker stardom were there for the man who famously won an EPT and broke down in tears at the magnitude of his achievement. For Romanello, it’s all about family, and it was long Before the Game.

“I believe that the whole thing is to do with working in the shops around my Mum and Dad and how they’ve brought us up,” says Romanello. “That’s what got me this far. My Grandad brought his family over to Wales from Italy because they were very poor and there was no work. My Dad worked on an Ice Cream van for £3 a week, then he worked on a farm, then went back to Italy, married my Mum and brought her back over to this country. They both worked very hard and rented a café, and from having nothing, they worked their way up.”

The hard-working attitude saw the Romanello family thrive. They rented at first but then bought their first fish ‘n’ chip restaurant outright. It was 45 years ago.

"We saw my Mum and Dad work so hard, so all four of us worked the same."

“My three brothers and I all worked in the family business. We saw my Mum and Dad work so hard, so all four of us worked the same. My Dad expanded the businesses by buying another chippy and then another one. When me and my brothers came along, we helped expand the business.”

Soon, the Romanellos had another restaurant, then another. Frank Romanello, who’d turn out to be a pretty impressive poker player in his own right, was ambitious for the family business empire to grow, and they all contributed. Roberto Romanello credits these early years talking to customers in rapidly filling restaurants in developing his personality at the poker table.

“One of the most important things is having been in the restaurants every day, meeting new people. Those people skills have been priceless. I was a bit of a talker at the tables when I first started playing. I used to be a huge personality and I got a lot of information from the weaker players when I was playing on the UK circuit. Meeting new people at the circuit, making lots of friends - that made me really.”

Getting his Poker Chops

That ability to talk to anyone hadn’t been honed alone. Romanello’s brothers were always around, and it was through them that Romanello learned to play poker.

“Around once a week, when the chip shop closed, I’d invite a few of my mates over. Me and my brothers would all sit down, chuck in a fiver each and that’s how my home game started. There’d always be about six or seven of us in a sit ‘n’ go, and we’d have one or two games a night. I used to bash them all up. It went from there to the pool hall for a tenner and I was fearless in those games. When we went to the pool hall, I did the same thing there to 30 or 40 runners at a tenner a time. I was winning £150-200 each time. Then somebody said that they ran £100-entry tournaments in a casino in Swansea.”

“I’d never been there, and I went that night to play my first tournament. I was shitting myself."

Playing home games or in a local pool hall were one thing, but a professionally ran tournament? Dealers? Strangers? It was all a bit scary.

“I’d never been there, and I went that night to play my first tournament. I was shitting myself. There were older guys, and there seemed to be a loud guy who was the boss at each table. I had butterflies in my stomach. But the second time felt completely different and I started to win there, tournament after tournament. I was always going home with £500-£1,500 every time I was going there. I started to travel to Swansea and Cardiff from then on.”

Visions of Vegas, Being the Best

At this point, poker was a permanent fixture on television and between shifts at the restaurant, Romanello was watching legends play the game. He realized that noone had conquered the game and that everyone made mistakes.

“Once I’d had a little taster, in my head, I was better than everyone. They used to show a lot of the Vegas stuff on TV, including repeats of the WSOP. I remember watching Eli Elezra, with this stack of chips in front of him thinking ‘I can do better than that.’ That’s what was running through my head. I was thinking ‘Why did you do that? You could have got a lot more if you’d bet this much then that much.’ That was my mentality.”

“Once I’d had a little taster, in my head, I was better than everyone."

Romanello cashed at the Welsh Masters in Swansea, then made the break to go to Las Vegas and play in the biggest tournament of all - the WSOP Main Event. Incredibly, he cashed in that too, then returned to Wales as if nothing had happened. He was back in action in Swansea just a few weeks later, cashing again. He had the bug, and heard about a tournament called the European Poker Tour.

“I played the Welsh masters and I heard there was an EPT in Barcelona and said, ‘Let’s go.’ I booked a flight, got a few friends together, sorted a big apartment, all to play the Main Event. Back in the day, EPT Barcelona was held in a smaller room. I walked in there with no experience and the place was rammed. It was packed out, cash games everywhere. I was new to all of it.

"I go up to the desk and say that ‘I’ve come to play the EPT Main Event.’ They say ‘Sorry sir, it’s sold out, completely full, no more seats. There’s a waiting list that is 70 players long.’ There were people selling their tickets for more money, just to play the Main Event - which they allowed back then. I looked around and thought, 'Is this real?' I’d gone to play the Main Event and I couldn’t. I had to find a game.”

Romanello was desperate for a tournament. He had no idea that the one he would play would change his life forever. Find out what Romanello did in Part Two of Roberto Romanello: Before the Game.