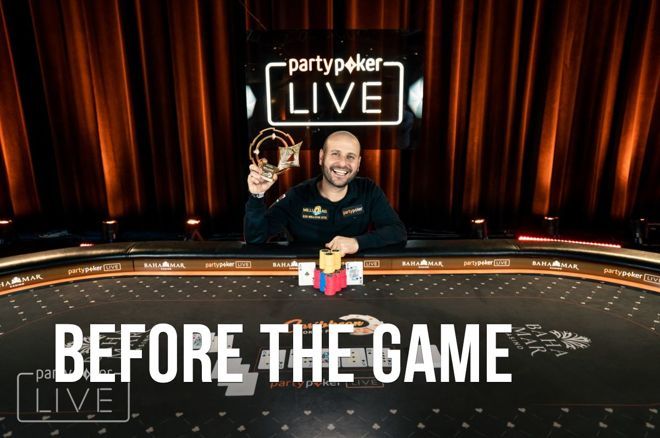 When we last spoke to Roberto Romanello, the Welsh Wizard was just the Welsh Whizzkid. Still in his twenties, he’d pitched up in Barcelona, Spain. However, having been told that the EPT Main Event was full apart from a ludicrous waiting list, he had two choices - go home or find another tournament. It would be a choice that would define his fledgling career.

"I just knew that I was going to do well in poker."

Romanello and his friends weren’t about to retire to the hotel room for a quiet hot chocolate and tapas. The celebrations went long into the Catalan night, and that experience gave Romanello the most positive association with poker possible. He’s continued to carry it with him throughout his career.

“We just went out to the bars and had a great time! When I won that event with almost no experience whatsoever, I just knew that I was going to do well in poker. Now, no matter what tournament I play or where I am, I believe in myself. The biggest thing of all is having that belief in yourself. If you’re negative, you’ll win nothing. If there’s something I want to do, then I believe in what I can achieve it. When I want something, I go out and get it. That’s a winning mentality.”

WSOP commentator Lon Mceachern mentions Romanello's fish and chips shop in a fragment where the Welshman lays down jacks full.

It’s a blend of that winning mentality and Romanello’s infectious positivity that led to his poker sponsorships. Romanello was picked up by Full Tilt Poker and Matchbook in the past, and now plays under the partypoker banner. He feels honored by the partnership and always talks about the pride he has in representing the company at the felt. It even brings out his table talk every so often.

“Although I don’t use a lot of the chit chat at the tables now, the loud style of that chippy chappy at the table is still brought out now and again. Heads-up in the Caribbean (against Mustapha Kanit for the $10,300 High Roller he would win for $450,000), we talked loads and had a lot of banter, it was nice. I was extracting a lot of chips in the early days thanks to my table talk. But in the bigger tournaments, it doesn’t work so well. Those guys aren’t stupid, and I had to adapt to using my skills, bet-sizing, and the skills around my silent game. Now I only ever use table talk if I feel that it will really benefit me.”

"Text messages were flying through telling me that my final table was sick. It didn’t faze me at all."

Romanello can still recall the messages he received after taking down an extremely difficult final table featuring the ‘Man of 2018,’ Justin Bonomo. It was the highlight of his partypoker Caribbean Poker Party, but Romanello has never treated one opponent with more respect than another.

“Text messages were flying through telling me that my final table was sick. It didn’t faze me at all. When I won the tournament, I got bombarded by some of the best poker players saying ‘You beat the sickest players in the world.’ Those thoughts never entered my head when I was playing. I’m only thinking about what I’ve got to do to win. I always believe that I’m going to win. I played a huge pot against Justin Bonomo and three-bet him pre-flop, bet him with nothing on every street, and made a huge bet on the river. My bet-sizing was tactical, and I left chips behind on the river for a reason. Getting that bet through was normal to me. I didn’t think ‘I better not do it against him.’ I’m going to do what I need to do against every player to win.”

Romanello is, in some ways, built like the perfect poker player should be. Completely single-minded and armed with the ultimate winning mentality at the felt, away from the table, he’s a generous soul surrounded by friends on every break. It’s the recipe for success.

“My Mum and Dad always taught me to treat people how you want to be treated. I’ve got a lot of friends made playing poker. But those friends I brought to Barcelona weren’t poker friends. I didn’t have any of those back then. They were friends from home, and they’re still big friends now. The positivity is immense. €40,000 was huge money - it still is now. To carry that feeling around today, when I’m playing tournaments, it’s everything.”

"As time went on, I was fearless, and I still am now when I sit down."

Romanello’s career flew onwards from that EPT Barcelona side event. He would go on to win an EPT Main Event just three years later in Prague in 2010 and a WPT Main Event in Bratislava a year later. As the magnitude of the moment hit, the passionate Brit was in tears. It’s given him a bulletproof belief in his ability to take down any tournament.

“As time went on, I was fearless, and I still am now when I sit down. When I play tournaments, I just want to play well and not make mistakes. Deep in my heart, I know that if I play them over and over, I’ll end up on top. The more volume you put in, the results will show. Life isn’t just about playing poker; it’s about enjoying winning and positivity. You want to enjoy yourself, and I’ve had some amazing memories.”

The Gorseinon guy who grew up helping his family serve fish and chips would turn into a poker superstar for whom there were never too many chips. He’s still piling them up now and reaping the rewards for his dedication. He just doesn’t give them away as happily as he does back in his family’s fish ‘n’ chip restaurant in South Wales, as he did... Before the Game.

Before the Game: Roberto Romanello the Restaurant Worker (Part One)