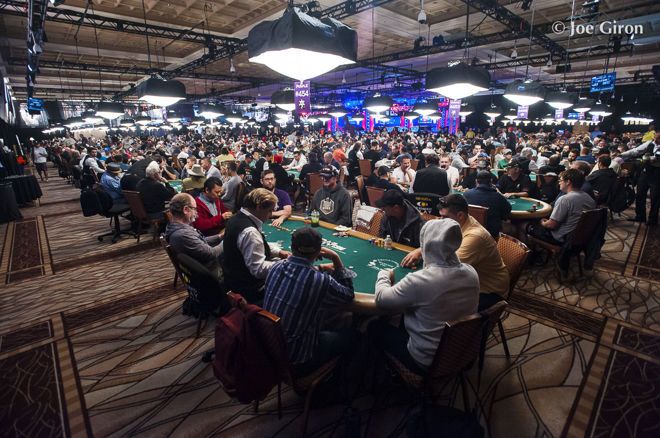 At long last, the 2020 World Series of Poker schedule has been finalized. Once again to be held at the Rio All-Suite Hotel & Casino in Las Vegas, players the world over can begin locking in their plans for the summer as poker's most prestigious tournament series will feature 87 events live and 14 online.

PokerNews takes a look at everything we know so far about the 51st annual WSOP, from the biggest buy-in bracelet event in history to any exciting new events announced.

When is the WSOP?

How many events will there be?

This year the WSOP have been releasing the events in batches. The completed schedule was revealed Feb. 27.

The biggest, richest and most prestigious poker festival in the world will once again be headlined by the $10,000 Main Event Championship, which will begin with three starting flights on July 1, July 2 and July 3 2020.

The fields will combine on July 6 and the tournament is expected to reach a final table on July 10. Following an off day on July 11, the Main Event final table will be televised on ESPN/ESPN2 from July 12-14.

Single table satellites for all poker variants at low, medium and high limits will begin on May 26 and run throughout the festival.

When are the WSOP Online Events?

The WSOP.com ONLINE poker platform will run 14 gold bracelet events, an increase of five from 2019. A $10,000 Online Championship event on July 2 had already been announced, but there is also an additional $1,500 No-Limit Hold'em event on June 30.

“We believe the 2020 offering of online gold bracelet events features our best schedule yet,” said WSOP.com’s Director of Online Poker Danielle Barille. “This year we offer a consistent schedule of Sunday events every week of the WSOP, plus a special selection of eight events from June 28 to July 5 to coincide with the biggest week of the live WSOP when most players are in town to play.”

All WSOP.com online gold bracelet events are expected to be open to anyone inside the borders of Nevada or New Jersey during the event dates. Players do not have to be residents of those states, they simply must conduct all game play while physically inside them.

Players participating in WSOP.com online events can do so via desktop, mobile or tablet for all no-limit hold’em events. The pot-limit Omaha event will require a desktop connection.

When is the WSOP High Roller Series?

Nine events featuring a buy-in of $25,000 and up make up the 2020 WSOP High Roller Series, and headlining the Series is the brand new $250,000 buy-in Super High Roller. This will be the largest buy-in bracelet event in the WSOP's history.

When are the 2020 WSOP Championship Events?

There will be 16 tournaments priced at the $10,000 mark, forming part of the WSOP's tradition of offering all variants of poker. These 16 tournaments will feature formats encompassing 24 different game types, with the $50,000 Poker Players Championship adding a ninth discipline to its rotation, with the addition of No-Limit 2-7 Lowball Draw.

"We are proud to be the only tournament series who spreads such an offering..."

“The Championship Events are always among the most special offered at the WSOP each year,” said WSOP Vice President Jack Effel. “We are proud to be the only tournament series who spreads such an offering and have worked with some of the games most distinguished players this off-season to ensure our schedule and the events themselves align well with where poker is in 2020.”

All the Championship events will be part of a new leaderboard the WSOP has planned for 2020. There will be a point-tracking leaderboard throughout the summer where a winner will be crowned with prizes up for grabs.

Caesars VP of Corporate Communication Seth Palansky told PokerNews he expects details on the various leaderboards to be finalized in March or April.

WSOP Championship Event Leaderboard; How Could It Work?

The WSOP has also announced the return of the BIG 50 No-Limit Hold'em event, which will again occupy the opening weekend slot of the Series with four starting flights scheduled to begin on May 28. The signature event comes with a $500 buy-in, 50,000 starting chips and 50-minute levels.

The WSOP announced that 25 different tournaments will be spread at the Rio priced $1,000 or under, and these tournaments would constitute the "Value Menu". These new tournaments will drive new players to the WSOP while also creating large prize pools, offering "something for everyone" at the world's favorite poker festival.

“Everyone loves good value and the WSOP has continued to enhance its offering to meet the demand at these meaningful price points,” Effel said. “Delivering large prize pools, new players and exciting formats are core objectives of the WSOP and these 25 events are key to meeting this mandate.”

Here are the 25 events that make up the "Value Menu":

What is the Freezeout Series at the 2020 WSOP?

The "Freezeout Series" are a half-dozen new No-Limit Hold'em tournaments priced between $500 and $5,000 that will utilize the freezeout format, meaning only one entry is allowed.

WSOP staples such as the Monster Stack, Main Event and the Mini-Main Event will keep the freezeout format, with more than 40 events on this year's schedule giving players just one shot to turn their buy-in into a bracelet.

How does the WSOP Mystery Bounty Event work?

On the face of it, the tournament will run as a normal freezeout bounty tournament, with part of the prize pool going towards bounties and the remainder going to a finishing position. However, the WSOP has announced that not all bounties will have the same value, with bounties ranging from the standard amount of $100 up to $250,000.

Every player is a bounty, and any player eliminated must turn over their assigned bounty chip to the player that eliminated them.

How can I buy into the WSOP?

Alternatively, anyone could register in person receiving their starting seat assignment and receipt. This guarantees players entry into an event. Players may use cash, casino chips and cashier's checks, tournament chips or credit/debit cards as methods of payment.

Remember to bring a valid photo ID and your Caesars Rewards Loyalty card to register for events. Participants residing outside the United States must also provide a second form of identification.

Can I register online for the WSOP?

The latter will be among the biggest changes for 2020.

“There is no doubt we need to do a better job of getting people in their seats and playing poker faster,” said WSOP Executive Director Ty Stewart in a company presser. “We’ve looked closely at several areas in the off-season and are dedicating new resources – technology, equipment and people – to aid in these efforts in 2020."

Twenty electronic kiosks will be made available. Players can register online, making a WSOP Tournament Account through Bravo Poker Live. They then verify their identities at the WSOP. Following this, they'll be able to simply walk up to a kiosk, buy in with funds from their accounts, print out a seating receipt and head directly to their tournament.

The WSOP aims to bump online registration from 20% up to a goal of 80%.

Could the WSOP be canceled?

As the world's various governments continue to struggle to get the coronavirus under control, speculation has run rampant about a possible WSOP cancelation. High-profile poker players on Twitter like Mike McDonald and Doug Polk offered to book bets on the possibility.

It wouldn't be the first poker event affected — both Triton and the World Poker Tour have already canceled events.

The WSOP has previously indicated it's monitoring the issue, and PokerNews reached out in light of the recent speculation to see if there had been any update.

"We’ve been monitoring the situation and will continue to lean on the experts in this field for guidance," Palansky said. "At this time, all our events and schedules remain intact and are planned to go on without interruption. We would be prepared to expand measures to ensure the safety of our guests and employees, again leaning on the experts."

Chumba Casino Reviews: Are Free Sweeps Legal or Not?

Get Your Hands on Extra $300 for JACKPOTS and Other Slots!

How to Get Free Spins for Starburst (and £10 for Slots)

How to Qualify for the WSOP: Main Event Satellites